Even though the Bull Terrier dog breed was initially developed as a fighting dog, it is nowadays a loyal and dedicated family companion. This affectionate pet adores all the household members, especially kids, but it is better to avoid this breed until your children grow up a bit.

Let your friendly pet become a part of the family’s daily activities. Be aware that it won’t enjoy loneliness, and do your best to prevent its anxiety and destructive behavior. Also, be careful and adequately socialize your buddy on time. Otherwise, it can become aggressive.

Everything You Need To Know About The Bull Terrier:

Bull Terrier breed history is not entirely clear. This breed was probably created in 1835 by crossing Bulldog and now-extinct old English Terrier. Since breeders tended to increase these crossbreeds’ size, they mixed them with Spanish Pointers. That way, they got excellent gladiators for dog-fighting.

It is well-known that white Bull Terrier Willie was beloved George Patton’s dog. Among numerous admirers were President Woodrow Wilson, actress Dolores Del Rio, and Nobel Prize in Literature winner John Steinbeck. One of the most famous Bull Terriers was Patsy Ann that greeted ships docked in Juneau, Alaska, in the 1930s. This dog became the official greeter of Juneau in 1934, and its statue was erected in the harbor in 1992.

You can see Bull Terrier in movies and read about its adventure in Sheila Burnford’s book ‘The Incredible Journey.’ The breed’s popularity skyrocket in 1980 after Budweiser’s commercials with lovely Spuds Mackenzie. In 1999, AKC Champion Kingsmere Moondoggie ‘Smudgie’ became the official Target Corporation mascot.

Ch. Rocky Top’s Sundance Kid became a star of the Westminster Kennel Club dog show in 2006 as the first colored Bull Terrier to win Best in Show. Until then, Ch. Haymarket Faultless was the only white Bull Terrier that managed the same in 1918.

Bull Terrier old type wasn’t gentle like the breed we know today. In fact, the Bull Terrier original look has changed since then, and the breed has passed a long way from ferocious gladiators to beloved pets we admire. Nowadays, this dog breed ranks 61st in popularity among those registered by the American Kennel Club. The newest recognized Miniature Bull Terriers is currently at 129th place.

Except for popular working English Bull Terriers, you can also adopt:

Bull Terrier’s personality is unique. This dog is a feisty extrovert and courageous but also a friendly companion kind with its family, kids, and strangers. It is almost impossible to find a shy individual in this breed group.

An excellent Bull Terrier guard dog is dedicated, loyal, and protective. It will bark to warn you to strangers and become aggressive when feeling that its family is endangered. Be careful when noticing undesirable Bull Terrier characteristics like chewing, barking, and tail chasing, and give your best to solve them on time.

Modern Bull Terrier temperament is sweet and a bit silly. It will be an excellent companion to older kids. On the other hand, toddlers can’t recognize the warning signs. Be careful since maltreated Bull Terriers bite, and that is not harmless at all.

Without early socialization and proper training, you can face Bull Terrier behavior problems because this dog can become jealous, possessive, and aggressive toward other pets, especially dogs. Although this breed can learn to be tolerant, it is better to avoid leaving your buddy alone with small animals.

The most popular dogs are:

Bull Terriers care is not a complicated task. Its coat is easy to groom and requires only brushing with a curry brush or rubber mitt once a week. Since Bull Terrier sheds a lot twice a year during shedding seasons, you will probably need to brush your furry friend more often in that period. In most cases, there is no need to bathe it. Trim its nails once a month when needed and check its ears weekly. That’s all.

Bull Terrier needs daily exercises, especially when it lives indoors. Provide enough physical and mental stimulation to your buddy, and it will be a happy and satisfied pet that you can only wish for.

Bull Terrier training requires a calm and persistent owner. It is better to teach this courageous and self-confident dog through games and fun than in the traditional way.

You should always find the best dog food for Bull Terriers to fulfill all your dog’s needs. Recommended Bull Terrier diet includes 2 to 4.25 cups of high-quality dog food a day. Still, you should adjust the meal to your dog, depending on its age, gender, size, activity level, and Bull Terrier food quality. Always divide this amount into two separate meals for better digestion. Luckily, this breed tends to stay in good weight and rarely becomes overweight.

Bull Terrier’s health is generally excellent, but this breed may sometimes have problems like any others. Some of the most frequent Bull Terrier health issues include:

Heart disease – Some Bull Terriers have a defect in heart structure, followed by a heart murmur.

Spinning – This obsessive chasing the tail for hours prevents the puppy from drinking and eating. It usually appears after it is six months of age.

Skin problems – These white Bull Terrier issues are a consequence of sensitive skin susceptible to irritation, rash, and soreness.

Allergies – Your Bull Terrier can also suffer from inhalant and contact allergies, especially those caused by chemicals, pollen, mold, and dust.

Lens luxation – This Bull Terrier health problem occurs after the ligament holding the eye lens in place deteriorates, and the lens displaces.

Hereditary nephritis – This kidney disease’s severe form often occurs at an early age due to undeveloped kidneys or filter malfunction. Consequently, the dog suffers from high protein levels in urine.

Unfortunately, puppies suffering from this disease usually die in the first three years of their lives.

The required tests include:

Since some health issues appear after full maturity, health clearances are available only in dogs older than two.

Bull Terrier loves its humans and is incredibly dedicated to its owner. However, this strong-willed and rambunctious dog is not an excellent option for first-time owners and families with toddlers. Keep in mind that some cities and states restrict keeping this breed, so you should inform yourself well before adopting it.

What Do You Know About The West Highland White Terrier? 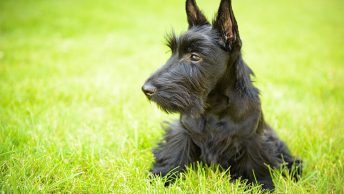 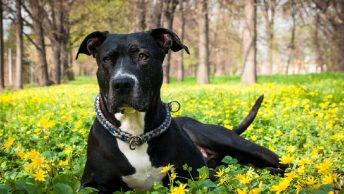