Many people want to adopt lovely Dachshund without being aware of its real nature. Initially, this confident and fearless dog was bred as a game hunter. Therefore, the question are dachshunds aggressive is a bit strange to me. Yes, of course, this breed is genetically predisposed to aggression, especially towards small animals.

This dog thinks quickly, acts independently, and prefers making its own decisions instead of obeying orders because breeders forced those traits for centuries. Be aware that it is practically impossible to get insecure and cuddly Dachshund, but adequate training can suppress excessive aggression and lead to the desired socialization level. Let’s take a look.

Dachshund (sausage dog, badger dog, wiener dog) is undoubtedly one of the trendy dogs worldwide thanks to its loyalty to the owner and unconditional love to children. It is playful, intelligent, and energetic but quite stubborn and independent. That makes it challenging to train.

Germans developed this strong, fearless, and intelligent breed about 600 years ago to hunt badgers. This perfect hunter follows its instincts that are often misunderstood as aggression.

The study conducted at the University of Pennsylvania showed that Dachshunds is the most aggressive dog breed among 32 of those with a high likelihood of biting. Instead of the expected candidates like Pit Bull Terrier or Rottweiler, the top of the list looked like this:

According to this study, this breed is the most aggressive toward strangers. What’s worse, only Beagle is more aggressive toward its owners. The sausage dog is also at the top of the list of the most aggressive breed toward other pets, particularly other dogs and cats. The question is whether it is even possible. Well, the probable answer is yes and no. This small doggy is actually a dedicated watchdog but also a lovely house pet.

Some genetic characteristics of this breed include qualities that manifest as aggressive behavior, mainly when fearless Dachshund is not appropriately trained and socialized on time. Still, DogBite.org presents Dog Bite Statistics in the US and fatalities caused by dog bites every year, and it has never included Dachshunds.

Taking everything into account, you can conclude that a Dachshund is more aggressive than an average dog, but a well-trained pet is not a mortal threat to humans. Just because this breed is genetically predisposed to aggression doesn’t mean each dog will negatively behave.

It will mostly depend on you as the owner and the way you treat and teach your dog. If your Dachshund learns that aggression is not an option, it will be able to suppress its instincts. However, be careful since the dog showing dominance towards both people and other dogs may cause you many troubles.

Are Dachshund Is More Aggressive Than Other Dogs?

Dachshund is on the top of almost all lists of the most aggressive breed. It is a bit rough since not all of them are aggressive in general. They just tend to display feisty behavior.

You as an owner need to keep this tendency under control and prevent bad behavior on time. Plus, it is essential to recognize the difference between aggression and excessive excitement most Dachshunds are prone to.

There are many different canine aggression categories, so you should find the reason for your Dachshunds inappropriate behavior before you start solving the problem.

You can expect your Dachshund to be highly territorial and protective of its home. In some cases, it will attack and bite people stepping out to its territory, whether they are strangers or not.

Some owners value this kind of behavior, but it can become a problem when it is out of control, and you can’t influence your dog. The first step is to teach your buddy to warn of visitors but never attack.

Dachshund is well-known for its protective behavior toward its family. Therefore, it is always prepared to react aggressively if it thinks that any family member is in danger. Both males and females are prone to this aggression type.

Your buddy can sometimes show the tendency to keep its food and toys away from people or other pets. It will inappropriately react when anyone tries to come near a bowl or its desired item in some cases.

A fearful dog often becomes aggressive when it is in danger or trapped. Once escaping stops being an option, you can expect your dog to respond aggressively. It is rare to see such a situation with Dachshunds because these sausage dogs are almost always fearless.

When your Dachshund starts perceiving itself as someone with higher status than household members or other pets, it can show aggression. It is a natural and instinctive sense of dog hierarchy, and the only way to avoid this problem is to socialize the puppy correctly.

When someone tries to hold back a highly excited dog, it can immediately react aggressively. In such a case, a frustrated dog can bite at the leash or hand holding it.

Unfortunately, the dog may connect restriction with frustration over time and react aggressively even without reasons for excitement. The best example is lifting the dog when guests come and preventing it from welcoming them.

It is a common type of adverse reaction when a dog shows aggression towards an animal or human, and its owner or someone else tries to interfere. That is the reason why the owner is often bitten when trying to break up dog fights.

Pain is the primary reason for aggression. Therefore, be careful when trying to help the injured or ill dog in pain. In such a case, it will often bite even its owner. It is not actually real aggression but a defense mechanism.

Intact males will still ask for female’s attention and vice versa. Sometimes, even neutered and spayed dogs can show this aggression type in a certain period of the year.

Dachshund is a predator and hunter, so you can expect it to chase and grab fast-moving small creatures, crying babies, running kids and people, cyclists, and cars. Some of them will bite a caught animal or human without warning before an attack.

In most cases, your Dachshund won’t tolerate a leash. You can notice the moment when your friendly dog starts barking and resisting as soon as it spots it.

Keep in mind that Dachshund is born to be tough and hunters, so aggression is a part of its nature. Plus, your buddy can develop so-called small dog syndrome and show aggression towards people and other pets. Therefore, proper training is crucial in problem prevention.

Strangers – Some Dachshunds can show aggression toward people. The usual reason is territory protection. Aggression towards strangers shouldn’t surprise you since Dachshund is not naturally predisposed to behave friendly to them.

Particular people – It is also not rare to notice aggression toward specific people, like adult men or those with a cane. In that case, the probable reason is a previous bad experience and abuse.

Owner – Aggression towards owners is not so common, but this dog can show it to protect food when feeling pain or trying to dominate. Be careful when deciding to adopt an older dog with established behavior patterns.

Kids – It is extremely rare for Dachshund to show aggression towards children. If it happens, the reason is almost always a lack of socialization and training. Another option is inappropriate and rough child’s behavior.

In some cases, Dachshund can display sudden aggression without apparent reason. Think twice! This dog never shows aggressive tendencies just like that. It is always a result of changes in the routine or immediate environment or establishing dominance. As soon as you notice such behavior, you need to determine the cause and find a way to efficiently correct it.

Socializing – Proper socialization will solve most behavior problems with Dachshund.

Hormones – When your vet determines hormones as a probable cause of aggressive behavior, get them fixed with adequate therapy.

Age – Some seniors may develop an issue with hearing or vision, which often results in aggressive behavior. There is no quick solution for this, but care and patience are always the keys.

Dachshund puppies are often feisty. If you encourage inappropriate behavior since it looks cute, you may face a problem in the future. Start with the training as soon as your puppy is ten weeks old.

Gender – In most cases, females are more docile. Neutered males will be less aggressive.

If you want to have peace of mind, you need to give your best to teach your Dachshund that aggression is not an option. There are a few steps to deal with its behavior: 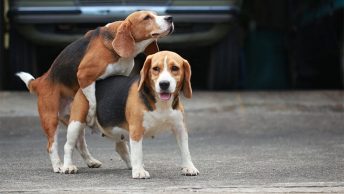