If the long-haired Dalmatian sounds like a new variety, you might be pleasantly surprised to learn the dog has been around for many years. Only over the last few years has the stigma of having a long coat been lifted from the Dalmatian. As recent as 2015, there were less than 100 long-coat Dalmatians on the planet.

A Dalmatian with a long coat is purebred and has not been crossed with another breed to create a designer dog. The long coat variety occurs because of a recessive genetic trait found in the Dalmatian breed.

LC Dalmatians, as they are also known, are 100% normal Dalmatians, except for one thing, and that’s their coat. The LC has the same temperament and personality, has the same looks and appearance, even the same coloring, and has no additional health concerns. The AKC does not accept the LC Dalmatian because the dog doesn’t conform to the breed standard, so if you have a long coat variety, you will not be allowed to show him. However, you can still enter your dog in obedience and agility trials.

This article will give you some excellent information regarding their temperament, care, and training if you’d like to know more about the long-haired Dalmatian.

What Is A Long-Haired Dalmatian?

A long-haired Dalmatian is identical to the standard Dalmation, with one exception the length of the dog’s coat. Also known as the long-coated Dalmation, long-coat, or the LC Dal.

If the parent dogs both possess an LC recessive gene, there’s a likelihood they will produce a litter of long-haired puppies. Naturally, breeders do everything to ensure this doesn’t occur. Breeders do not want their dogs producing puppies with a long coat because they cannot be registered with the AKC and cannot be shown; this, in turn, affects the price a breeder can demand for their puppies.

Dalmatians have a long history and can trace their heritage back to 1374 when a Bishop talks about a hunting dog from an area within Croatia called Dalmatia. The Bishop recounts a dog with short white hair and black spots that he named Canis Dalmaticus. Paintings from the 1600s feature a dog with this description. The first recorded time the name Dalmatian was used was in 1771 by a writer called Thomas Pennant.

During the early 1800s, the Dalmatian became well-known as the spotted coach dog because people often saw him trotting alongside his master’s carriage. From here, the Dalmatian’s development occurred mainly in England. An Englishman, Vero Shaw, was responsible for the first unofficial Dalmatian breed standard in 1882, and by 1890 the standard was made official. During their history in Dalmatia, the dog helped guard the Dalmatia borders and was also a hunting dog and dog of war. Even modern-day Dalmatians still possess guarding and hunting instincts.

The Dalmatian’s best-known role was working with early firefighters. In the days before motorized vehicles, horses pulled the fire wagons, and the Dalmatian would run ahead of the wagons to clear a path. The AKC (American Kennel Club) registered the Dalmatian in 1888 and is now the 56th most popular dog breed in the USA.

The most obvious and famous thing about the Dalmatian, except for the dog’s history with Disney, is his spots. No other dog looks as distinctive as a Dalmatian; even people who know very little about dog breeds all recognize the Dalmatian. Dalmatian puppies are not born with their spots; they are all white. But by the time they reach about one month, a young puppy will have developed most, if not all, his spots. It has been known for some Dalmatians never to develop spots, but this is pretty rare.

The Dalmatian has a short, sleek, and shiny coat unless he happens to be a Long coat Dalmation. Coat colors are white coats with black or liver spots. Never black and liver on the same dog. Some Dalmatians now have other variations in their coat colors such as lemon, orange, brindled tri-colors, brindles, tri-color, and blue.

The Dalmatian’s ears are always floppy, and they have long tails. Having such a short coat allows for the muscle definition to be very apparent. You won’t be able to see this definition with a long-coat Dalmatian. The coat of a Long-coat Dalmatian will grow out to about four inches with feathering on the ears, tail, and legs.

Long-haired Dalmatians are the same size and weight as standard Dalmatians, and as is the case with most dog breeds, the female will be slightly smaller than the male. The Dalmatian male reaches a height of 24 inches and the female up to 22 inches. Both male and female Dalmatians can weigh up to 70 pounds.

Long-haired Dalmatians are incredibly athletic, high energy and intelligent dogs. You might wonder what that has to do with his personality; well, without satisfying his needs for vigorous exercise and mental stimulation every day, he will become emotionally unstable, leading to boredom, destructive behavior, and hyperactivity. All of which seem to point to a dog with a bad temperament. Anyone contemplating adopting a Dalmatian needs to be completely aware of what’s required to keep these dogs in the right frame of mind.

If you enjoy outdoor pursuits, running, jogging, hiking, or biking, then you can take your Dalmatian with you, and he will thoroughly enjoy the experience. You’ll also provide the much-needed exercise. Early socialization is another prerequisite with this breed; they can be anxious and nervous if not socialized sufficiently. Dalmatians are notoriously stubborn, so a firm owner is essential. A firm owner doesn’t mean unkind, but patient and consistent, capable of teaching the dog boundaries and what is and is not acceptable behavior.

With the right owner, correctly trained, and socialized, the long-haired Dalmatian can make a wonderful family pet and get on well with children. I want to emphasize trained and socialized; it’s imperative. Start this very early in their lives; intelligent dogs learn bad habits very quickly and very young.

The typical Dalmatian’s coat requires only minimal brushing; once a week will suffice just to remove dead hairs and ensure he keeps his shiny coat look. If he’s the long coat Dalmatian, you’ll need to brush him more frequently to make sure he doesn’t get any tangles or mats. Dalmatians don’t require baths frequently either, as long as he hasn’t rolled in something disgusting, then every couple of months; that goes for the long coat Dalmatian also.

The Dalmatian’s floppy ears need cleaning regularly; every week would be best. Dogs with floppy ears all have issues with ear infections more frequently than dogs with pricked ears. The ear design helps retain moisture inside the ear canal, and that can cause fungal infections.

Clean a Dalmatian’s ears once a week with a doggy ear cleaner; it will also help break up any wax build-up. A Dalmatian needs his nails trimmed regularly to prevent them from splitting and causing the dog pain when he walks or runs.

If you know Dalmatians, you’ll appreciate just how much the dog sheds. It’s pretty constant all year and even increases during springtime and autumn. Long-coat Dalmatians are precisely the same and shed just as much.

Long-haired Dalmatians are not hypoallergenic. With the amount of hair, they shed it would be impossible. Having said that, no dog can be genuinely hypoallergenic; it’s a fallacy when breeders advertise their dogs as hypoallergenic.

Low shedding dogs may not trigger allergic reactions as heavy shedders, but that’s because low shedding dogs tend to trap their loose hair in their undercoats, and that restricts the amount of dander that gets thrown into the air.

The main culprit that sets off allergic reactions is pet dander, which is microscopic flakes of dead skin. Animals can throw this into the air every time they shake or scratch themselves. Of course, the more a dog sheds, the more dander floats around unseen by the human eye. You reduce the effects of dander on your allergies by vacuuming the pet hairs each day and by brushing your dog every day; it’s best to brush him outside, not indoors.

Long-haired Dalmatians have a life expectancy of 11 to 13 years. There are some genetic health conditions. Dalmatians are prone to urinary stones; this is dangerous for males because of their narrow urinary tract. It’s also a disease that requires constant monitoring throughout the dog’s life. Another inherited disease is hyperuricemia which is excess uric acid in the Dalamatian’s blood. Some other conditions that afflict Dalmatians are skin allergies, epilepsy, hip dysplasia, and Dalmatians are susceptible to deafness.

The long-haired Dalmatian is identical in every way to a regular, standard Dalmatian except for the length of his coat. His personality, size and weight, exercise needs, training, and socialization needs are all the same. 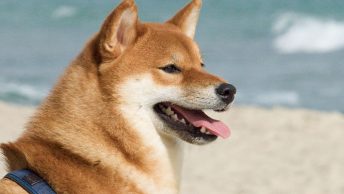 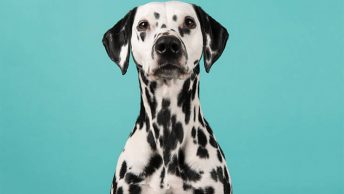 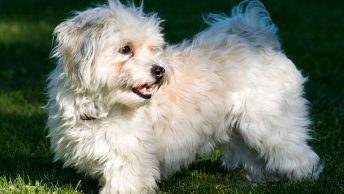