One popular question frequently asked is, can dogs eat curry? The answer is a resounding no; dogs shouldn’t eat curries. Of course, curry is a general term encompassing many various cultures and different styles of curries.

For example, when we think of curry, most people immediately think of India. While it’s true, all curries around the world originated in the sub-continent, countries have tweaked the ingredients and flavors to suit their national tastes. Nowadays, numerous countries have their version of curries, such as Thailand, Indonesia, Malaysia, and the Caribbean, to name a few.

But generally speaking, they all have one thing in common: they all contain herbs, spices and most of the curries contain chilies in one color or another.

The ingredients going into curries is why they are bad for dogs. Some dog owners may read this article and claim they feed their dogs’ curry, and their dog has never had a bad reaction or stomach upset of any kind. Of course, this is perfectly possible, and I wouldn’t dispute what they say, but it still doesn’t mean it’s good to continue the practice.

There are reasons for this that we will discuss in this article and get to the bottom of whether dogs can eat curry?

What Effect Do Curry Ingredients Have On Dogs?

Here are ten of the most common ingredients, these are not the only ones you can find in a curry, but they are the most widely used.

Let’s discuss the merits and possible harmful effects of the most common ingredients in Indian curries.

Chilies can be mild to hot and spicy, but they range from medium-hot to hot in a curry. Also, drying out the chili makes it even hotter. So feeding a dog chilies is a bad idea. I doubt many people would feed a chili directly to their dog; it would be the same thing to provide them food with chilies as part of the recipe.

Not only will chilies cause gas, diarrhea, and stomach pain, but they will also make a dog incredibly thirsty, and if the dog drinks excessive water to calm the burning sensation, they’ll likely vomit.

Thankfully, Cinnamon isn’t toxic to dogs, but it still doesn’t mean it’s a good idea to feed it to him. Eating cinnamon as cinnamon sticks, oils or ground can irritate the dog’s mouth and throat.

If you check out the Pet Poison Helpline, they state that it can take more than a teaspoon of ground cinnamon to cause problems; however, smaller breeds might not be able to take that much. Too much-ingested cinnamon can have serious side-effects even to the extent of low blood sugar and liver disease.

Dog owners can safely give fenugreek seeds and leaves to dogs; they aren’t toxic and can have some health benefits for dogs. However, that’s not the same for fenugreek extracts and oil; it can be bad for dogs in such a concentrated form.

But as we are talking about fenugreek seeds in a curry, what are the benefits of fenugreek?

There was a study back in 1984 where they gave dogs with high cholesterol levels and diabetes small amount s of fenugreek seeds; the results were excellent because it seems that fenugreek can reduce both blood glucose and cholesterol levels. There may also be other benefits to feeding fenugreek to dogs because of its anti-inflammatory properties.

There are several health benefits of feeding your dog cayenne pepper, such as helping the dog’s circulation. But there are good things about cayenne for your dogs. Cayenne pepper can offer some joint relief; as we mentioned, it can help with blood circulation. If your dog suffers from cold extremities or arthritis, the warming nature of cayenne can provide some relief.

There are also some excellent vitamin benefits for dogs with cayenne, such as vitamins A, C, and B-complex. There is also some evidence that it will help dogs as a digestive aid.

Coriander, or cilantro as it’s also known, is a safe herb for dogs. They might not like the taste and turn their noses up at it, but it’s perfectly safe. There are some health benefits from coriander, such as vitamins A, K, C plus iron, potassium, and manganese minerals. Coriander is also a well-known source of anti-oxidants.

Unless your dog has eaten coriander previously and shown signs of an allergic reaction, there’s no reason why he can’t have some added to his food. Though, if he eats a well-balanced diet, there’s no particular reason to feed him coriander. But it is a common ingredient in curries, so it’s good to know it’s not harmful.

I can’t say I’m a believer in feeding dogs human foods when it doesn’t definitively give them health benefits. If your dog has a good diet that’s balanced with the correct amounts of proteins, fats, and carbohydrates, he doesn’t really need ‘other’ types of food. Yes, if there are health benefits, I don’t object to giving them a try.

Cumin falls into the category of something I wouldn’t bother feeding my dog. There’s no harm in small amounts, but there’s no evidence to suggest it helps dogs either. Having said that, if you feed a dog more significant amounts of cumin, it can bring on digestive and stomach problems. If they don’t need it in their diet, why provide it to them?

Cardamom is one of the most popular ingredients in curries, but should you feed it to your dog?

Cardamom has both a strong taste and smell, so it’s possible your dog won’t like it even if you try to feed it to them. Plus, if you overfeed cardamom, it can act as a laxative. I know we all want what’s best for our dogs, but is it worth risking your dog coming down with a case of diarrhea because there might be some dubious health benefits to cardamom? I personally would avoid it.

Perhaps it would be better to discuss the pros and cons of cardamom with your vet before giving any to your dog.

Mustard seeds contain compounds that are known to be toxic to dogs. These compounds can cause gastroenteritis and inflammation of the intestinal tract.

If you think your dog has eaten mustard seeds, then keep your eyes open for any signs of abdominal pain. The pain will often accompany diarrhea and or vomiting. If this happens and you know the cause is mustard seeds take your dog to the vet immediately.

There has been lots of research on turmeric’s benefits for humans; its anti-inflammatory benefits are well documented. But there hasn’t been the same amount of research for dogs and turmeric. It’s fair to say, though, it probably will help dogs suffering from conditions such as arthritis. It may even reduce their need to take Non-Steroidal Anti-Inflammatory drugs, which can only be a good thing. There are some side-effects if the dog inadvertently consumes too much turmeric, such as constipation or a general upset tummy.

Owners shouldn’t feed it to dogs who have kidney stones. Turmeric can escalate the problem by increasing the dog’s urinary oxalate levels. Never introduce untried food to a dog on any medication until you have spoken to your vet. Some foods react badly with some medications.

For example, turmeric can lower a dog’s blood sugar if they eat it while they are on prescription medication for diabetes. In these matters, the first course of action is to always speak to your vet before going ahead.

Asafetida is a plant with a very bitter taste and pungent smell. It’s very often put into products that repel both cats and dogs. So I would say it’s not good to feed it to your dog, that’s if he would even go near it. But as an ingredient already in some food, its unpleasant nature is probably well hidden. Whether it would harm a dog, I wouldn’t risk it.

Other Ingredients In Curry – How They Affect Dogs?

It’s safe to say garlic is widely used and loved in every corner of the planet, but does that mean our dogs should dig into a plate full. The answer is definitely not. I know some dog owners swear by garlic as a flea and tick deterrent, but overall it’s best to avoid feeding garlic to your dogs.

Garlic contains thiosulfate, which is poisonous to dogs yet harmless to humans.

The thiosulfate problem is its damage to the dog’s red blood cells, leading to hemolytic anemia. If your dog has eaten garlic and begins to suffer from these symptoms, get your dog to the vet, dark-colored urine, jaundice (yellow eyes), lethargy, rapid breathing, and bodily weakness.

Onions are similar to garlic in that they are from the allium family, and they also contain thiosulfate. So, everything we spoke about garlic holds with onions.

Naturally, if the curry takeout you just ordered contains onions and garlic, why would you want to share that with your dog?

Dogs need sugar in their diet the same way humans do, but they can get all the sugar they need from the carbohydrates you feed them in their dog food, which is why I stressed in this article the value of a correctly balanced diet for your dog. Giving dogs anything to eat that contains refined sugar is terrible for any dog. It will cause massive inflammation in the dog’s body.

Excess sugar in a dog’s diet can cause a whole range of severe health conditions, not the least being obesity. Which is fast becoming a worldwide health issue to dogs. Too much sugar will throw out the balance of gut flora in your dog’s tummy leading to all kinds of issues, not least diarrhea and vomiting.

As with humans, so too with dogs. Teeth decay. This is a massive problem with dogs and losing teeth if their teeth are not cleaned every day; it’s not just losing teeth, which is bad enough. There are serious health consequences for dogs with rotten teeth.

Obesity is a huge problem with pet dogs. They are overfed, given too many treats, and given sugar-rich treats at that. Obesity brings on a whole host of other health concerns from heart disease, back, joint problems, and difficulty breathing.

Garlic and onions both contain thiosulfate, known to cause anemia in dogs. And of course, there’s refined sugar which is the biggest culprit of obesity and diabetes in dogs worldwide.

The curry will contain spices, and not all of those will agree with your dog’s stomach. I have listed some common ingredients in curries, but there are more that we haven’t touched on. For example, Thai curries will have some different ingredients from Indian curries, which might have a detrimental effect on your dog. Why take the risk and feed your dog any type of curry from whichever country it originates.

It can be difficult to refuse a dog when they sit and stare while you are eating. After all, we love our dogs and always need to be kind and to please them. But, in reality, you aren’t kind to them; you might just be setting them up for a severe illness. 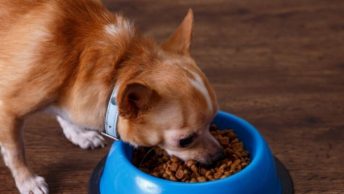 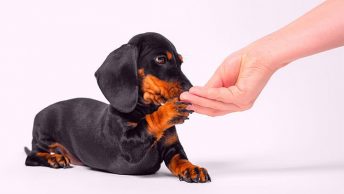 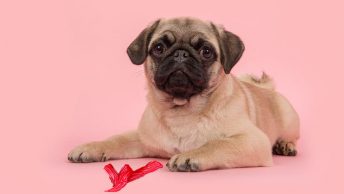 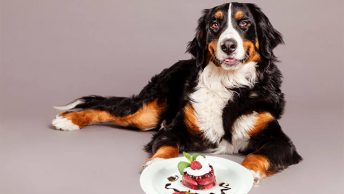 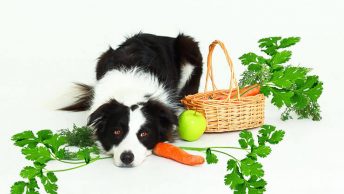