Australian Shepherds are super intelligent affectionate family dogs, commonly referred to as adorable Aussies, but not for the first-time owner; we’ll explain why later in the article.

They may have Australian in their name, but the dog’s heritage is firmly rooted in 1840s America. Ranchers bred the Aussie (the other name for an Australian Shepherd) for sheep and cattle herding when the settlers moved across the country. Even today, the Aussie works on ranches in the States, but these days his place is secure as a loyal companion dog to homes worldwide. In this profile, we’ll discuss all about Australian Shepherds, including their personality, character, and history.

Everything You Need To Know About The Australian Shepherd:

Are Australian Shepherds from Australia? This question gets asked a lot, and it’s a little confusing why the dog’s name includes Australia, but the dog’s history clearly shows he’s very much an American creation.

In some quarters, the belief is the Aussie originates from herding dogs taken to Australia from the Basque Region of northern Spain; however, the Spanish dogs didn’t look anything like the Aussie as we see him today. Dog fanciers can make another argument for the Aussie’s beginning regarding the German Tiger, which also traveled to Australia in the early 1800s. Locally these dogs were known as German Koolies; today, they are Australian Koolies. These particular dogs have a look far more akin to the Aussie.

However, on arrival in America, the dogs were a great asset for their sheep herding skills, adaptability, and high intelligence. From these early dogs, American Stockmen bred future dogs based on climate and the land the dog’s worked. Any dog in those days needed to have stamina, herding and guarding abilities, independent natures, and supreme intelligence. The Australian Shepherd is American, developed in America; the Australians do not recognize the Aussie as a native Australian dog breed.

An Australian Shepherd’s average weight is between 50 and 60 pounds, and they grow to heights of up to 23 inches; the females are always slightly smaller. The Aussie lifespan is 12 to 15 years. Aussies are spry, and athletic dogs, muscular, yet are not ponderous or heavy. Their build is perfect for the arduous and strength-sapping work they perform. Australian Shepherd’s have a naturally bobbed tail, or it can be docked, typically around four inches in length. In recent times you’ll see Australian Shepherds with normal length tails, especially if the dog is primarily a family pet.

Aussies possess a proportionately shaped head and muzzle with ears that sit on top of the head and fold forwards but are not ponderous or hanging; they create an excellent triangular shape. The Aussie’s eyes are almost almond-shaped with varying colors between brown, amber, or blue.

Aussies have a double coat that’s thick and protective. The outer coat is straight, tending to slightly wavy, but you shouldn’t see curly hair on an Aussie. The hair grows more profusely around the neck, legs, and along the tail. The undercoat is dense and soft, but depending on the climate where the Aussie lives will determine just how thick an undercoat he needs.

Australian Shepherds shed a lot, especially during the seasonal changes. It’s not necessary to bathe an Aussie too often, you might find they have rolled in something you definitely don’t want transferring to your couch, but otherwise, once every three months will be sufficient. Their heavy shedding means a good brush every couple of days; this will brush out the dead hair that gets trapped in the undercoat. Plus, it will get rid of any dirt or debris snagged in the coat.

Aussies are not hypoallergenic; no dog can be 100% hypoallergenic. If you have an issue with dog or pet allergies, you should consider if the Aussie is the right dog. Australian Shepherd and allergies go hand in glove if you suffer these allergic reactions to pet dander. Typically it’s the dander, which is microscopic pieces of dead skin, and a dog’s saliva that produce allergic reactions in some people. Because your Aussie will frequently shed hair, the skin particles and dried saliva can circulate in the air along with the dog hairs.

Aussie Shepherd colors can be pretty varied, but they are all hugely attractive. Blue merle is typically seen more in the Aussie, but there are four colors and three markings. The other colors are red merle, red, tri-color, and black. The merles have darker splashes against the paler background; blue merles look gray with black splashes, whereas a red merle will have red splashes against beige. Blue merles will have a black nose, while red merles and reds will have a brown (reddish-brown) nose.

The Aussie temperament will suit owners who lead active lifestyles and enjoy the outdoors. Your typical Aussie personality is a high-energy dog and exceptionally smart. Aussies are always looking for a job. They need this mental workout as well as physical to prevent them from becoming hyper and uncontrollable.

Remember, Aussies are traditionally tireless working dogs; they were given a purpose in life, and they loved the work. Just because you want one as a family pet doesn’t remove those genes; they are still in the Aussie. You need to get your Aussie outside, exercise him until he’s tired. You can also offer him puzzle toys that engage his brain; this will also occupy him. It’s a huge commitment and responsibility from you if you own one of these dogs.

If you fail to offer the correct amount of exercise or cannot give him enough brain work, you’ll start to notice your Australian Shepherd having behavioral problems. Besides the considerable time and effort commitment with Aussies, they will also demand more of your time because they want to be with you. Australian Shepherds do get close with their family and have bouts of separation anxiety if they are left for too long.

Around strangers, Aussies can be wary and standoffish; some breed lines can even be timid. It’s crucial to socialize an Australian Shepherd puppy very early in their life to properly acclimatize them to different people, sights, and sounds; timidity can quickly turn to aggression if the dog is frightened enough. Australian Shepherd’s are intelligent dogs that can lead them to be stubborn, so training can be an issue. Hence, why we say an Aussie is a bad choice for first-time owners.

6. How Are Australian Shepherds With Kids?

Aussies tend to do better with older kids; they can get outside with the dog and give him the kind of exercise he needs. Younger children might face the problem of the Aussie’s herding instinct kicking in and have their heels nipped and pushed and prodded to where the dog wants them to go.

As an Aussie parent, you should immediately discourage this behavior from your dog. Australian Shepherd nipping behavior can begin to get pretty bad when the dog doesn’t get enough exercise and starts to get bored.

7. Do Australian Shepherds Get Along With Other Dogs?

Providing you have socialized your Aussie Shepherd thoroughly, then he will be okay with other dogs and pets, mainly if he’s grown up with them. But, they have that herding instinct, and the same problem that can occur with small children can also occur with smaller pets.

You can trim the coat a little if it’s getting snarled, but generally, their coats do not need trimming. The hair feathering on the backs of their legs might need some attention; these can get quite easily tangled and matted. Australian Shepherds grow hair long on their feet, so you’ll need to tidy this up reasonably regularly.

How Big Are Australian Shepherds?

Aussies males grow to 23 inches and females a little less at 21 inches.

How Many Puppies Do Australian Shepherds Have?

On average, an Aussie mom will have a litter size of between 6 and 7 pups.

How Smart Are Australian Shepherds?

Australian Shepherds are very smart dogs; they are rated number 42 out of the total number of dog breeds; they will learn a new command after 25 to 40 repetitions and have a 50% success rate of getting it right the first time.

Is An Australian Shepherd Right For Me?

While it’s challenging to say conclusively if an Aussie is right for you, providing you are fully committed to giving the dog a massive amount of exercise, including brain work. You socialize the dog early in his life; you are firm, patient, and consistent with training and want the epitome of a velcro dog, then you should do exceptionally well together.

Is There A Toy, Teacup, Or Miniature Australian Shepherd? 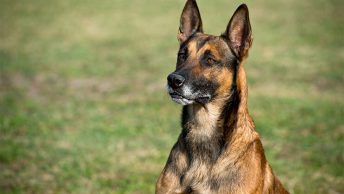 Belgian Malinois – A Dog That Can’t Be Insecure