Both lines of Akita are large dogs; they will take some handling, so if you’re not an experienced large dog owner, both Akita lines are probably not going to make a good family pet. But, we’ll cover that later in the article.

Because of their breeding, both American and Japanese Akitas are highly territorial dogs and are aggressive towards other dogs, although the American probably not as much. Both dogs need socializing correctly and from a very young age.

The AKC only recognizes the two lines as the same breed, but there is a broader debate on them being two distinct breeds. American Akita vs. Japanese Akita, if you’re ready to understand the main distinctions between the two, let’s get going.

Akitas are a Japanese dog breed (don’t confuse the Akita with the Shiba Inu), and their history goes back hundreds of years. Hunters used the Akita to hunt deer, wild boars, and bears. Akitas would find and track and even kill the prey. These hunting skills were highly prized in dogs when all a hunter had was a bow and arrow.

What made the Akita more valuable was the dog’s ability to think for himself. While other breeds had skills for flushing or retrieving prey, Akitas were capable all-around hunters. During the middle ages in Japan, the Akita became a favorite of the Japanese elite, and only royalty could own one. The Akita was an asset capable of guarding people and their property.

Life became tremendously hard for Akitas during the first half of the twentieth century. World Wars didn’t help because many were killed for the warmth of their coats or food and crossbreeding with western dogs. However, a few devotees saved the dog from extinction by breeding Matagi and the Hokkaido Inu with the few remaining Akita Inu to help restore the Akita breed.

The Japanese Akita doesn’t have genes from other dog breeds and are of the Spitz family. However, the American Akita still has those genes from before the Japanese restored the breed. In 1937 the Emperor of Japan gifted two Akita puppies to Helen Keller, who took them back to the United States.

Most people have heard of the legend of Hachiko, the most famous Akita, who waited at the Shibuya railway station for his master to return for nine years. But, unfortunately, his master had died at work and was never going to return home, unknown to Hachiko. After the Second World War, American servicemen began bringing home Akitas; however, their preference was for the Akita mixed with western breeds, not the smaller Akita Inu.

American Akitas are undoubtedly bulkier, furrier, and more heavily muscled compared to a slimmer Japanese Akita. In addition, the Japanese Akita has almond-shaped eyes, whereas the American has smaller, deeper set eyes. The American Akita and Japanese Akita will shed throughout the year, with heavy shedding occurring twice each year when seasons change. Neither of these two breeds is hypoallergenic, not even close.

There is a variation between the two dogs on coat colors. The Japanese Akita has only four colors, sesame, brindle, red fawn, and white. However, the American Akita has a broader color range, probably due to its mixed heritage.

American Akita has similar colors to the Japanese but can also have:

Both lines of Akita are renowned for their loyalty and devotion to their owners. If you refer back to the part regarding Hachiko, you’ll see what I mean. But devotion and loyalty are one side of a coin, the other side being territorial and aggressive. Both these breeds can be aggressive towards other dogs and, even though not as bad, towards humans. Forming such devotional ties to their human family can induce guarding, territorial and protective behaviors to strange dogs and humans.

Studies back up these tendencies to aggression, and the studies seek to discover the most aggressive dog breeds. One stand out from these studies is the aggressive nature of the Akita. One study from New Zealand Veterinary Journal published in 2011 found the Akita to be very aggressive. In total, 108 dog breeds and six crossbreeds were assessed by 185 members of the Companion Animal Society of New Zealand and the New Zealand Veterinary Association. A further study sought to discover breed differences in canine aggression by Applied Animal Behavior Science. The study surveyed owners of over 30 dog breeds to assess the typical responses to various stimuli. The Akita scored (more than 20% of Akitas) high concerning dog-related aggression.

Because of their size, physical aggression towards other dogs and people can have terrifying consequences. Having said all that, Akitas, American or Japanese, can make wonderful family pets. But they need to be in the right family setting and with owners that understand these dogs.

Socialization is vital and from the very earliest age will make a huge difference. Socialization aims to eliminate any guarding and territorial behaviors and for the dog to become accustomed to meeting and mixing with other dogs. Of course, there’s no guarantee you can eliminate these Akita instincts entirely, but it is still crucial to go ahead with socializing your dog.

Because there are no guarantees with socialization, you must keep watch on your Akita when he’s close to other dogs, unfamiliar people, especially children. Both Akita lines have exceptionally strong prey drives. They will chase and kill any small creature they come in contact with, including cats. So if you have other pets at home, you might want to reconsider your choice of dog breed.

Surprisingly both the Japanese and American Akitas only require a moderate amount of exercise. You might expect them to be closer to the Husky when we consider how much exercise they need.

As long as you can provide 30 minutes to one hour each day, the Akita will be fine. The type of exercise can be brisk walks through the park, gentle jogging, and if you have a good-sized yard, just a good romp around in there will be great. Unless you have socialized your Akita, as we have suggested, then a walk over to your local dog park might not be a good idea.

Large dogs such as the Akita shouldn’t be over-exercised when they are puppies. Studies have shown it detrimental to the dog’s long-term health if they have been over-exercised when young. There is an age scale with corresponding exercise levels for different breeds, and your vet will be able to advise you about your Akita.

Training the American or Japanese Akita is not an easy task. They might be loyal and devoted dogs, but they are also highly intelligent and free-thinking dog breeds. They do something when they prefer to do it, not when told.

This attitude is another reason inexperienced owners find it easy to fail in the dog breed’s training. Even experienced dog owners defer to a professional trainer to get the best out of an Akita.

Training an Akita is all about patience, kindness, firmness, and above all, consistency. All family members need to get behind the training method and work with the family member undertaking most of the training. Because the Akita is such a devoted dog, praise and reward, plus the attributes I’ve just mentioned, is the best way forward.

Which Akita Is Best For Me?

If an Akita is the dog you want, then it’s more a choice of the size and looks of the dog. The temperament, exercise, and training will be much the same for either dog breed, so it’s a personal choice on appearance.

Whichever you choose, the American Akita or the Japanese Akita, you will be bringing an incredible dog home to your family.

Neither of these two Akita lines will be an easy dog to control. But if you’re sure you have the time, energy and you’re prepared to socialize and train responsibly, you’ll have an excellent, devoted, and loyal family companion. 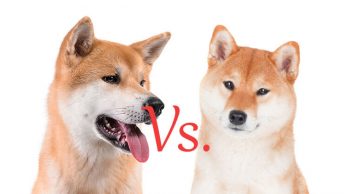