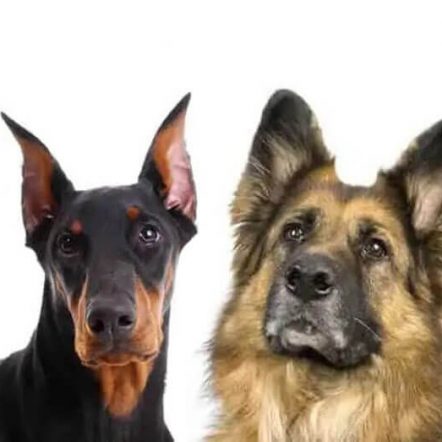 It’s pretty accurate to say most dog owners prefer purebred dogs of one breed or another. Still, more and more dog owners are finding the idea of a hybrid dog fascinating, and their popularity is undoubtedly on the rise.

Perhaps you love the idea of a Doberman, but you also love the thought of a German Shepherd; two dogs are out of the question; what do you do? Of course, you opt for the best solution and choose a Doberman Shepherd and get the best traits of both dogs. However, Doberman Shepherds are still a breed themselves, and while they may take their looks from the parent dogs, they possess an appearance that’s uniquely their own; that also goes for their personality.

Should you be keen on owning either a German Shepherd or a Doberman, possibly the idea of their hybrid appeals to you; if that’s the case, this guide will give you plenty of information about the German Shepherd Doberman mix.

To fully appreciate the Doberman Shepherd, his heritage, appearance, and personality, it’s essential to know more about the parents’ histories.

Working German Shepherds have a history stretching back to the mid-1800s when the breed was standardized. German Shepherds were renowned for their ability to herd sheep, and shepherds would breed their dogs, attempting to create dogs with traits based on intelligence, agility, strength, and an excellent sense of smell.

We should give credit to one man in particular for producing German Shepherds as we know them today, and his name was Max von Stephanitz. He advocated for a breed standard of the German Shepherd and his dog Horan von Grafrath became the foundation dog for all German Shepherds that came later.

With the industrial revolution in full swing, the need for herding dogs began to diminish. Still, von Stephanitz deftly began promoting the German Shepherd to the military as a service dog, relying on the dog’s intelligence to win over the military and police forces.

During and immediately after World War One, anti-German sentiment led to “German” being dropped from his name and became the Shepherd dog. Over in England, a similar attitude was prevalent, but they went one step further and changed the name to Alsatian; many people still call him the Alsatian.

After the war, attitudes changed, and canine movie stars such as Rin Tin Tin helped change perceptions, and the dog’s popularity grew in leaps and bounds. Today the German Shepherds are ranked as the second most popular dog breed in the United States.

It’s purely a coincidence, but around the same time as the German Shepherd’s origins, another German man in Apolda, Thuringia, Germany, was creating a different dog, albeit for other reasons. Louis Dobermann was a German tax collector, and concern for his life led him to create a guard dog ferocious enough to scare off any would-be thieves or thugs. Luckily he was also the owner of the local dog pound, so picking what he thought might be the best dogs wasn’t an issue.

The German Pinscher was also an ancestor to the Rottweiler and Weimaraner. However, early Dobermans are said to have resembled the Rottweiler more than any other breed. The first Doberman was registered with the AKC (American Kennel Club) in 1908, but it took 14 years before the dog became popular. Over 100 recorded in 1922; a Doberman Pinscher Club of America was established in 1921 by George Earle 111.

During the Second World War, Dobermans served with the US marines working as messengers, scouts, and sentries; 25 Dobermans died during the liberation of Guam. Today the Doberman is ranked 17th most popular dog in the United States.

As we mentioned, the Shepherd Doberman is a hybrid or crossbreed of the German Shepherd and Doberman Pinscher; the breed’s history is a bit cloudy, though. Because of both the original breed’s geographical location, both breeds were crossbred at one time or another before it became a fashionable thing.

Breeding hybrids has generated controversy. Many dog breeders and vets have spoken against the practice because they claim the breed lines are unreliable and there aren’t enough controls on individual breeders. While this may be true, there’s no denying that hybrids tend to be healthier than purebred dogs. There is conjecture that because of an action called Hybrid Vigour in other species, then it’s feasible the same thing can occur in dogs. Crossbreeding purebred dogs may provide better health and fitness.

There’s a great deal of in-breeding with purebred dogs, increasing the possibility of genetic disorders passing down through generations. This type of in-breeding doesn’t occur with hybrids, so they shouldn’t be predisposed to the same genetic diseases.

Mixing two distinct dog breeds can be a bit of a lottery; there are no guidelines you can follow that predict what to expect. Puppies inherit the genes from both parents, so there’s nothing to say, this puppy will have this coat, or this coloring, etc.; you get what you get. But taking the parent dogs as a guide, we can predict certain traits. Both parents are large dogs, so it follows the mix will also be a large dog.

A Doberman German Shepherd mix will weigh between 90 to 110 pounds, and his height will reach from 22 inches to 26 inches. Because the parents are muscular and agile dogs, so will the mix. The German Shepherd’s coat is a double coat and medium length, whereas the Doberman has a short sleek coat. Some offspring will inherit a coat similar to the Doberman, but some will have a coat more like the GSD. Coat colors will typically be brown, black, or tan, sometimes with combinations of all three colors.

Both parents have coats that shed moderately, but of the two, the German Shepherd sheds the most however it’s a fair assumption that the Doberman Shepherd will shed and during spring and autumn will shed considerably.

Both parent dogs are working dogs, the German Shepherd is a herding and working dog, and they both have superior levels of intelligence; they learn quickly. Being bright can be a good thing but sometimes not so good. They can be stubborn and have the brains to work out how easy it is to avoid doing what they are told. So you can expect the Doberman Shepherd to have precisely the same levels of intelligence and cleverness as his parents.

It will take an experienced dog owner with excellent dog handling skills to get the best from this mix. In our opinion, it’s not the dog breed for a novice owner who struggles to remain firm, calm, and consistent. In the right hands, they make a wonderful loving family dog and are incredibly loyal. So much, so they can suffer from severe separation anxiety. Both parent breeds are excellent guard dogs, so Doberman Shepherds will inherit that trait, which means they’ll tend to be wary of strangers.

Socializing the GSD Doberman mix is crucial, and it needs to start when the dog is very young. Young dogs need to experience sights and sounds that might otherwise spook them or make them anxious. Meeting new people and strange animals is also vital to ensure your Doberman Shepherd grows to be a well-mannered and well-adjusted dog.

Training must start when they are very young, precisely the same as socialization. Doberman Shepherds must learn to obey your commands the first time. You’ll need to continue throughout the dog’s life. But that’s not a bad thing because these dogs need to have a lot of mental stimulation, so training regularly will help provide for that need.

The Doberman Shepherd is a significant, muscular, and athletic dog that needs plenty of daily exercise. You will need to split his exercise into two parts, about forty-five minutes to an hour for each session. They need to run; if you’re a jogger or runner, this is the ideal dog to take on your runs.

But enrolling them in agility trials or dog sports would be excellent for their physical and mental needs.

A Doberman German Shepherd mix can be an excellent choice if you’re an experienced dog handler and know how to deal with large, muscular, energetic dogs. If you have little or no experience with dogs of this nature, we advise you to look at other breeds; likewise, if you have young children in your family. 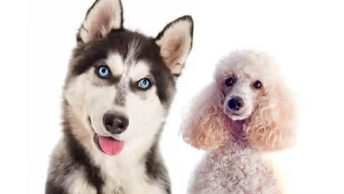 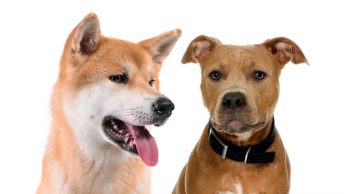