Dog Breeds That Use Their Paws A Lot 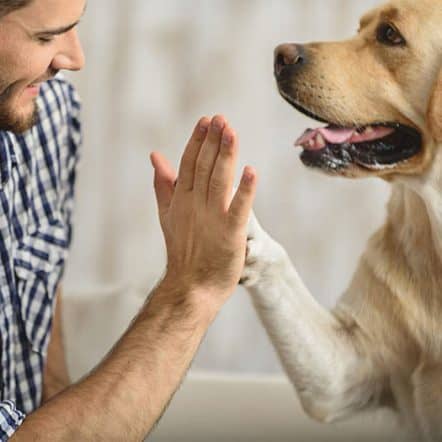 Dog Breeds That Use Their Paws A Lot

Dogs use their paws as a communication tool, they can’t talk to us, but if you pay attention, their paws will tell you so much. There are dog breeds that use their paws a lot, and others not so much. But I guarantee all dogs will use their paws, or pawing, at one time or another.

Dogs can and do communicate in other ways. They will use facial expressions, licking their lips, where they position their tails talks to you, and where would we be without barking.

You hear some dog owners complain their dog is constantly pawing their arms for some kind of attention. While it can be painful when they paw you, I would suggest it’s because you’re not paying attention to their needs. Some dogs can be needy, and they are seeking attention.

But “we are the authors of our own destiny” and if your dog is always pawing for attention, then I’m afraid you have spoiled them and brought created their neediness. Possibly that may sound somewhat harsh.

How To Understand Dog Pawing

Did you know you can learn to speak the doggy language? I know it sounds weird; I don’t mean to learn how to bark. But understanding what your dog is saying to you is the beginning of a wonderful relationship. There are so many positives and no downsides by speaking dog.

You can focus on your dog’s communication skills. Watch him constantly, you will soon notice signs of communication. It can be the expression in his eyes, the tail movements, how he licks his lips, and of course how and when he paws you.

But this article is about dogs that paw a lot, so let’s talk about that.

Pawing is a means for him to get your full attention. He’s telling you something. “I want to go out”. “Look at me, I want to play”. “It’s time for my breakfast”. All conversations he could have if only he could say it in words.

The reason they paw incessantly is that whatever they want, they want it ‘now’.

Pawing can become a behavioral issue if you don’t deal with it and curb it. There’s no upside in allowing him to paw you and then you do what he is demanding, you’re just reinforcing inappropriate behavior.

You must pre-empt his needs. For example, if he’s just eaten, and he always likes to go to the toilet after, then don’t wait for him to paw your arm. Take him out, right after his meal.

If you’re 100% certain he needs nothing, the pawing is only attention-seeking, then ignore it. Tell him ‘No’ and tell him to lie down.

But, putting his paw on you can also be a sign of something else. If he places his paw on you without trying to scratch you to death, but just leaves it there, not moving, it’s a sign of he’s either looking for comfort, or you’ve been upset with him and it’s his way of saying he’s sorry.

How To Stop Your Dog Pawing

Something you should do anyway, but clip his nails short. This needs to be done regularly for your dog’s paw health, but it will also prevent you from getting nasty scratch marks on your arm.

Understanding the way he’s pawing will help you decide how to deal with him. If it’s only a bit of comfort he needs occasionally, I would let that pass. But if his pawing is semi-aggressive or persistent, then you need to take steps. As I mentioned, when my dog pawed, I told him ‘No’ and to lie down. Other people may tell their dog to sit.

I have read that some trainers suggest when he stops, sits, or lies down, give him a treat. I don’t agree with that. I think a dog is smart enough to realize every time he paws; you say stop and when he does; he gets a treat. For me, that’s adding to the problem. Another thing I’ve read is to walk away from the behavior. Another thing I disagree with.

I don’t advocate yelling and not hitting your dog either. When I had this issue with my dog If I said ‘no’ but he carried on, I would gently take his legs and put him on the floor. Then I would say lie down. If he didn’t do it and jumped up again to paw. I would repeat this until he did what I said. He quickly learned to scratch would not get him what he wanted.

Dog Breeds Trained To Use Their Paws

They pick specific breeds for these duties and they are usually Labradors, German Shepherds, Golden Retrievers, and poodles (although maybe not as often). They train them to help people with disabilities and use their paws for turning lights on and off, to help with balance and when their owner needs to transfer from a wheelchair to bed and vice versa.

It’s even possible to train dogs to look after people suffering from severe diabetes. Teaching the dog to warn their human when there is a blood sugar problem. Amazing. How do they accomplish it? By using their paws.

Dog Breeds That Love To Paw

Certain breeds are ‘pawers,’ not sure there is such a word, but you know what I mean. The experts claim that dogs that love to dig like to paw. That would include breeds such as Dachshunds, Beagles, Miniature Schnauzers, Siberian Husky, Cairn Terrier, Jack Russell, Alaskan Malamute, Fox Terrier, and Border Collie.

Dogs bred for hunting, use their paws. These dogs will stand perfectly still, with one paw off the ground, their nose pointing towards the prey. This alerts the hunter to the direction he should look. Usually dogs adept at this skill have ‘Pointer’ in their names, such as the German Shorthair Pointer, or English Pointer.

Try to learn doggy speak, to understand exactly what your dog is asking for. If you appreciate their demands you can deal with it before the pawing even begins.

Many dog breeds use their paws a lot, and you might have one of those breeds. But you can break the habit with patience and understanding. You don’t want your dog to be constantly pawing when he wants your attention. There are other ways he can express himself if you teach him.